The Neuschwanstein Castle Tour goes through a large part of the Bavarian foothills of the Alps. We start the tour with a limousine, van or minibus in the centre of Munich and follow the motorway A95 towards Garmisch-Partenkirchen. After about 30 minutes we leave the motorway and drive via Murnau am Staffelsee towards Oberammergau and Ettal through the beautiful Graswangtal. And we arrive directly at Linderhof Castle, where our castle tour really begins. After a guided tour of about 2 hours through the castle and the park, we continue past the Plansee and over the Austrian Genze to Füssen. There we visit the world-famous Neuschwanstein Castle and the Marienbrücke as well as the Hohenschwangau Castle. 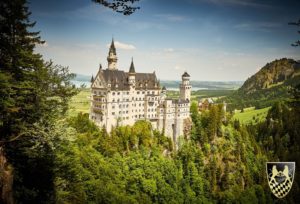 Discover the beautiful Bavarian castles Neuschwanstein, Hohenschwangau, Linderhof, Herrenchiemsee and Nymphenburg as well as the monastery Ettal with the Chauffeur- and Limousine Service Munich. Our day trip leads us from your hotel in Munich, Augsburg, Ingolstadt or Nuremberg directly in the direction of Garmisch Partenkirchen, the venue of the Olympic Winter Games 1936 and the Ski World Championship 2011. Shortly before Garmisch Partenkirchen we turn right in the direction of the community Ettal, which is world-famous for its monastery and the Benedictine Abbey Ettal.

Discover with us the royal castles and palaces in Bavaria, Neuschwanstein Castle Tour, Hohenschwangau and Linderhof Castle

We stop briefly for a short visit to the Benedictine monastery founded in 1330. And we set a direct course for Linderhof Castle, which lies in the middle of the beautiful Graswangtal valley. Linderhof Castle is the smallest of the three castles and, together with the Venus Grotto, is considered the absolute favourite castle of King Ludwig II, who was also called the Fairy Tale King. Of course, a tour of the Venus Grotto, which is known beyond the borders of Germany, should not be missed. Castle Linderhof is the castle where King Ludwig II spent by far the most of his time.

We are happy to show tourists and business people from all over the world the beautiful Bavaria and neighbouring Austria. 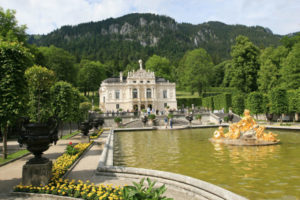 You can hardly decide whether you want to visit both castles – i.e. Neuschwanstein and Hohenschwangau – or just one of the two sights? Our tip: The tour through Neuschwanstein Castle takes about 1.5 hours including waiting time and ascent and is more than enough for most visitors. A walk to and across the nearby Marienbrücke bridge is also wonderful. From here you have an excellent view of the castle Neuschwanstein and can take great photos. After a long walk and a lot of fresh air we start our way down. Passing the castle Hohenschwangau we will go in direction Füssen and we will have a small coffee break in a hidden cafe with an excellent view. 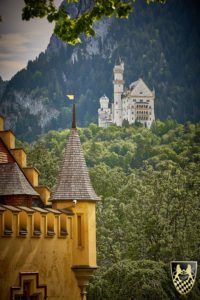 After the break we continue towards Steingaden in the Pfaffenwinkel to the world-famous rococo church, the Wieskirche. It was built between 1745 and 1754 by the brothers Johann Baptist and Dominikus Zimmermann. It is one of the oldest and most beautiful baroque churches in the world and was declared a UNESCO world heritage site in 1983. The Wieskirche is actually called the pilgrimage church of the Scourged Saviour on the Wies. After an approximately 30-minute walk we leave the Wieskirche and move back towards home. On the way to Munich we pass the town of Murnau and the beautiful Staffelsee lake on the motorway, along the Starnberger lake via Wolfratshausen finally to the centre of Munich.